The association between lights and the memorialization of deceased loved ones is seen prominently throughout many of the rituals that our society carries out in response to a death.  One example of this seen in today’s society are candlelight vigils, a practice in which participants honor loved ones by gathering at night with candles to celebrate and reflect on communal memories. Below, members of the Santa Barbara community gather for a candlelight vigil in remembrance of the victims of the Isla Vista shooting. 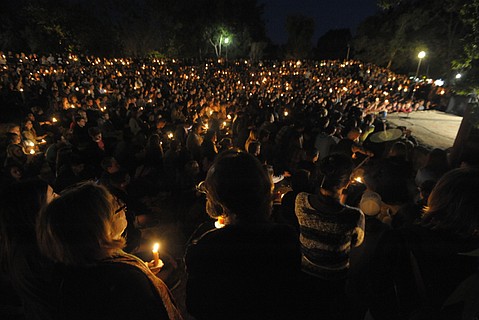 A year after the tragic shooting occurred, Marcos Novak and Kim Yasuda, two art professors at UCSB created what is commonly known as the “Pardall Tunnel Lights” installation to remind the Isla Vista community of their strength and to memorialize the tragic event that sent the community into mourning. However, the Pardall Tunnel Lights, are only a section of a larger piece designed by Novak and Yasuda originally named “Hesperus is Phosohorus” which relates the Greek morning and evening star being one in the same. The orginal name given to the Pardall Tunnel Lights is “Uguisukangei” after a Japanese reference to a nightingale floor (Light Passages).

The Pardall Tunnel lights both literally and figuratively illuminate the path that connect the UCSB campus and the Isla Vista Community (Light Passages).  Each and every day as students travel to and from campus, they pass through this tunnel and experience the delight of flashing lights that shadow their movements.  Many Students or visitors, like myself, may not have known the significance of these lights at first glance, yet could still appreciate their beauty and uniqueness.  To those of us who collectively experienced and remember the tragedy that stuck the Isla Vista community the Pardall Tunnel lights hold a much greater significance.  The lights serve as a site of memorialization for the victims of the tragedy, allowing people to mourn and pay respect to the deceased.  Yasuda and Novak assert the tunnel’s concept is to build the community by coming together in participation and connecting with one another.  Through collaboration, the Isla Vista community has illuminated the uneasiness of their town and spirits. 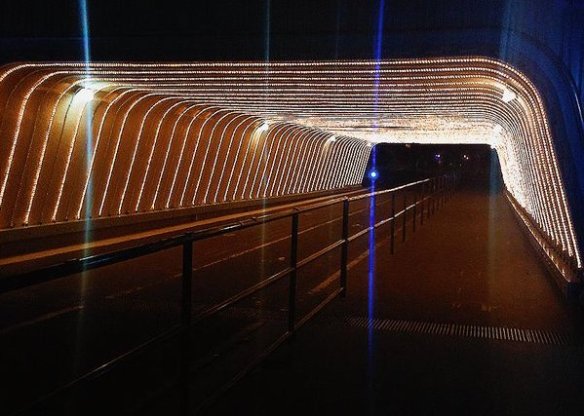 The Pardall Tunnel lights serve as a site of memorialization in which members who pass through the tunnel collectively remember the tragedy.  In “What is Collective Memory”, the author points out that, “Halbwach’s suggested commemorative events were important to reinforce autobiographical memories” (Britton). Therefore, each time members of the community pass through this tunnel that connects Isla Vista to the UCSB campus, they will experience the beauty of wavering lights and associate the lights with the memory of the Isla Vista community uniting in remembrance of the victims.